Ahhhh, summer time!  It's Monday, the start of a new week and I am trying to mix up a few different projects for us.  We've been spending lots of time outdoors in the pool, at a local lake and in the gardens weeding, weeding and weeding.  Today is a little grey and promising some much needed rain so I thought it was a good day for an art project. 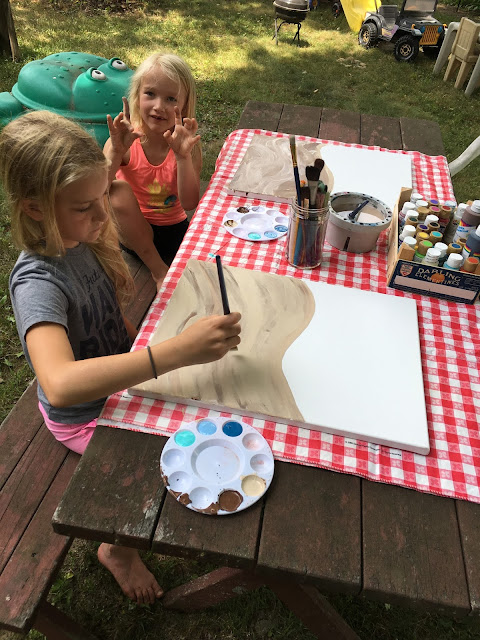 I found this project and thought it would be a perfect replacement for my artwork that was destroyed by a water fight in the bathroom.  (Lesson learned to not use tempera paint for art work that may get wet!) I should have known by all the belly laughs behind a closed door.  It was one of those times where I knew something was going on, something that I wasn't going to like, but the laughter and fun I knew they were having kept me from interfering.  Then I heard silence and quiet footsteps and the tears.  But all was made better with new paintings. 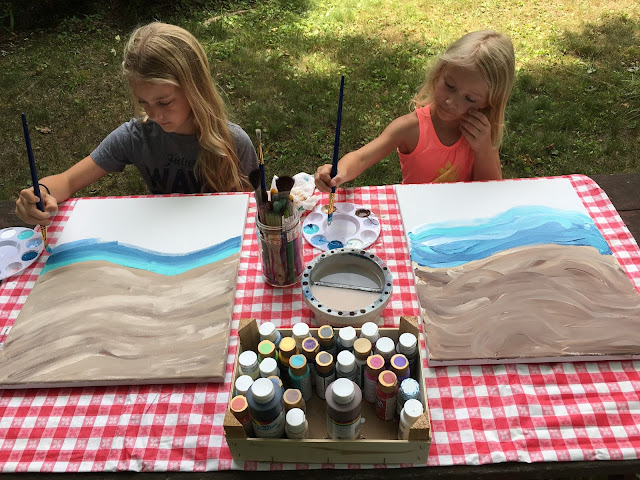 This time we used acrylic paints which gave us a lot more color options.  We stuck with a couple browns for the sand half, blues and white for the water half.  I made the wave in the middle and they just had to follow the wave with the paint.  One of my painters is very precise and wants perfectly consistent, flowing waves, the other completely opposite and kept wanting to add swirls and abstract.
I love how their personalities shine through in their artwork. 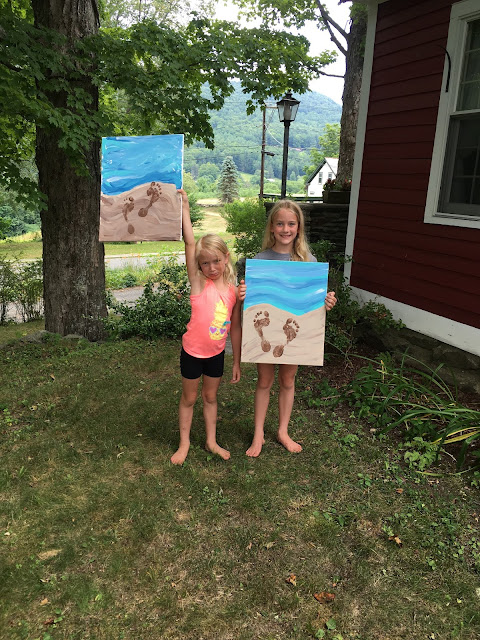 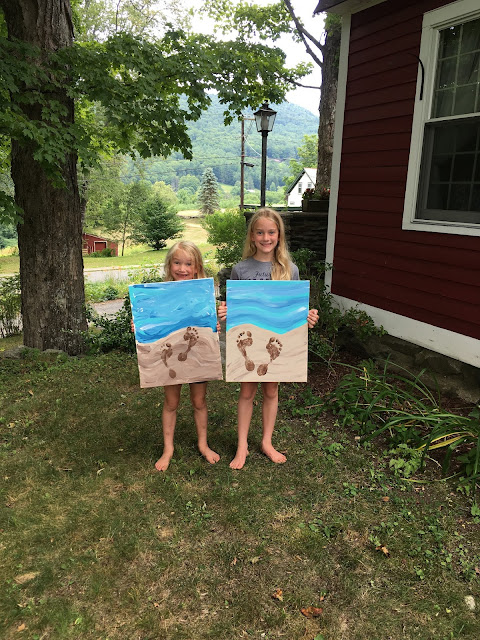 We painted their feet dark brown and I helped them place them on the canvas for the footprints.  This would have been great for little tiny toes.  It just came to me but having a larger canvas and adding their footprints every year on a birthday would be an awesome reminder of their growth. 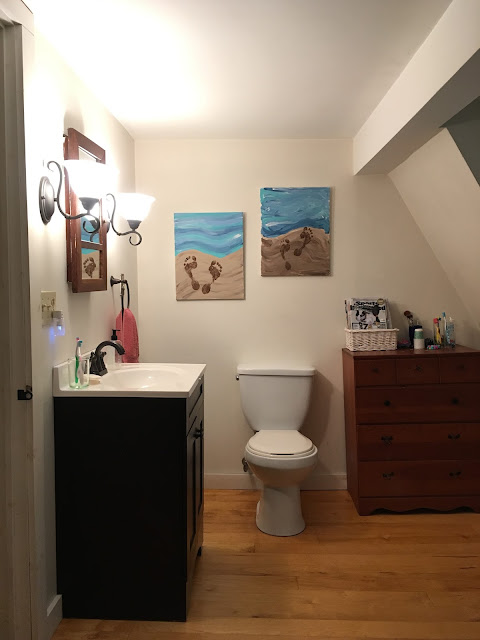 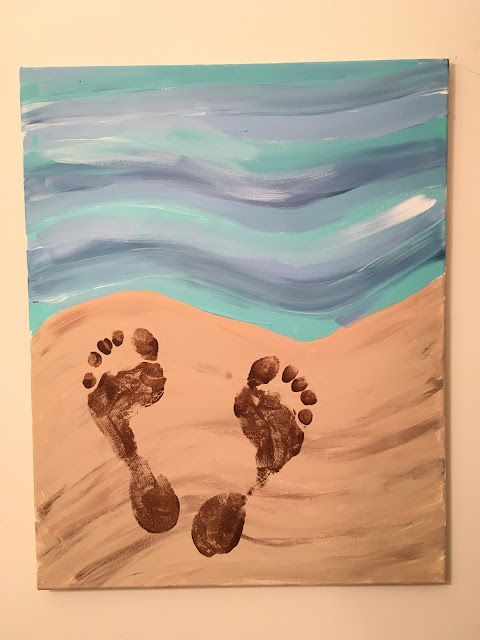 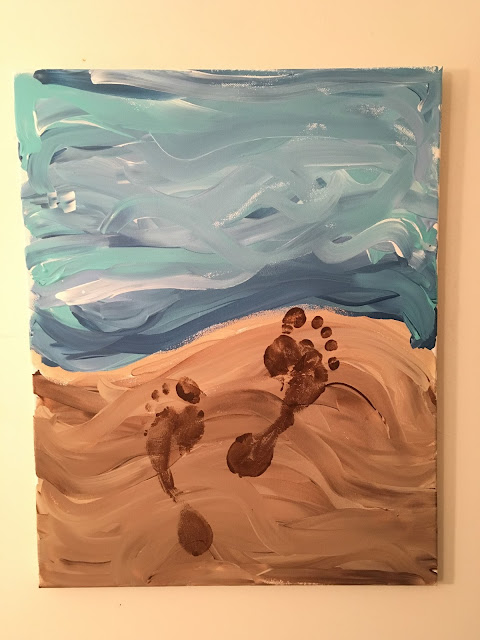 Posted by Jenna Lyn Smith at 4:59 PM No comments:

Every year that we start school vacation we go through a big adjustment.  We are very used to our routines and it's a little hard to drop our crazy school and extra activities and go right to nothing.  Since we are so busy all school year I like to take the summer almost completely off so we can actually get bored and start to get creative with our time and ideas.  I let my introverted ways take over for a little bit and recoup my mind and soul for the coming school year. 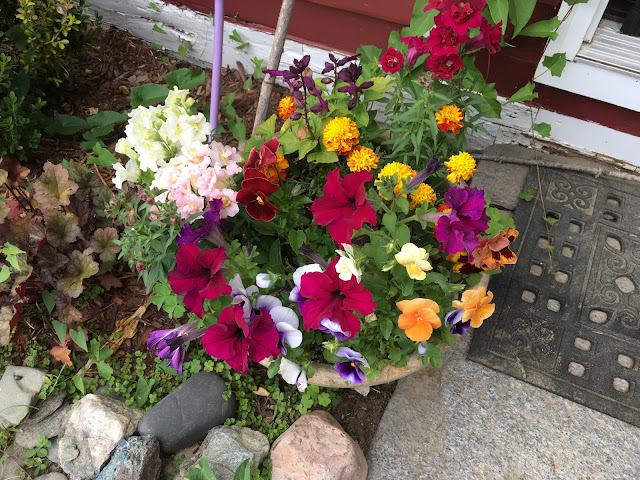 It's been a couple weeks that the girls have been out of school and the worst part of transition for everyone is over.  We did do some fun things including a relaxing trip to the beach for an early summer family vacation. 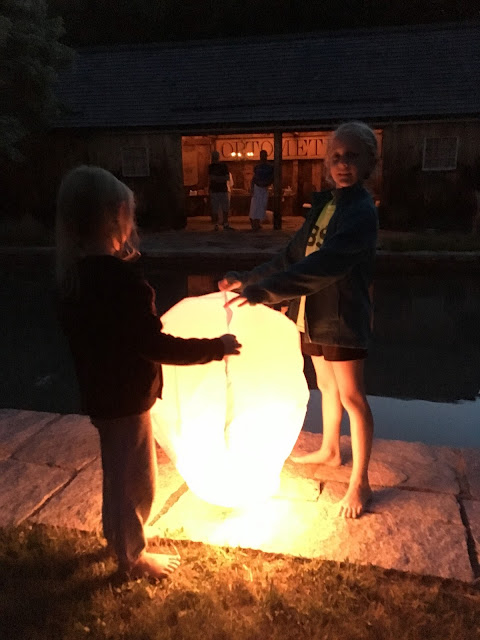 Fourth of July was spent at a couple parties.  One of which they let off paper lanterns at dusk. 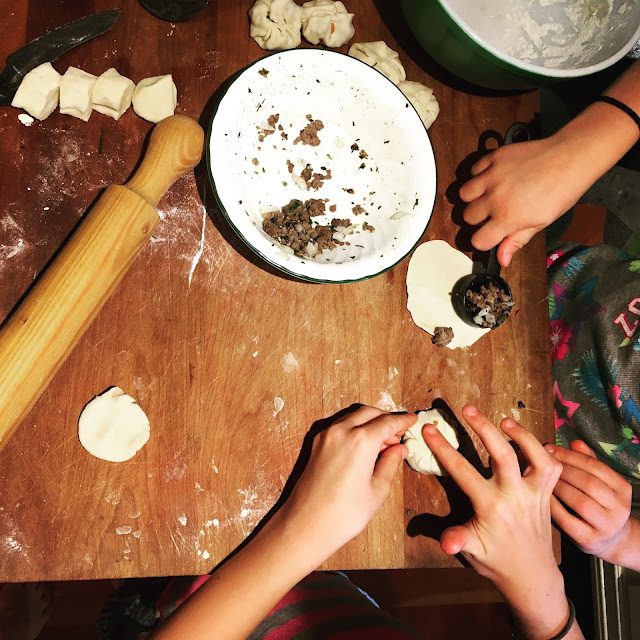 I was craving dumplings after seeing a recipe in the Better Homes and Gardens magazine so I got the kids involved in rolling and stuffing. 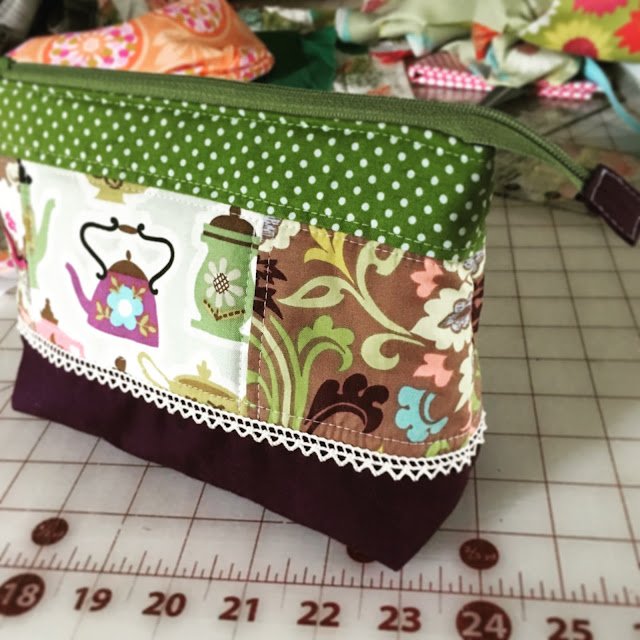 I've started making some new projects.  I used to do a lot of craft shows but gave them all up due to the enormous amount of work, the boredom of sitting there all day and not enough sales to make it all worth it.  Our town has started an event at the end of July and I will be setting up a table there with some zipper cases and reusable shopping bags.  I still have a ton of fabric left over from closing the Stitch Lounge and am hoping to use some of it up.  If it wasn't for the fact that it's being held right down the street I would not be doing it. 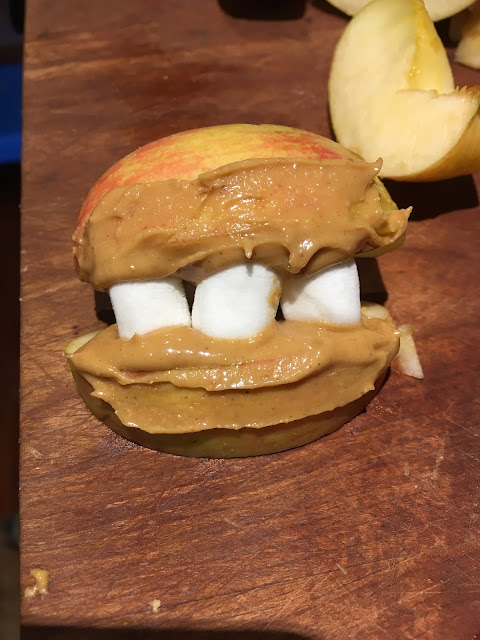 Jasmine has been exploring cooking and making.  She's to the age now where she can figure out more complex directions and even use the stove.  She will get an idea then go to the internet to explore some ways to make it.  One afternoon we all got monster mouths (above)!  She's more interested in making the play dough than playing with it.
Of course the biggest challenge is keeping the kids occupied for the summer and keeping my sanity.  I am a firm believer in letting them be bored for a little while so they can use their imaginations, play outside and pull out some old toys and games.  That's not to say that we don't do lots of other stuff but when we've been gone running around and then come home the "I'm boreds" and being able to figure out what to do without me involved are overwhelming.  On the other hand sometimes they get so involved in play and projects and I can't get them to leave.

Posted by Jenna Lyn Smith at 6:38 AM No comments: