Ordinarily you would not find me planning and picking out any fabrics that would cause me to use vulgar language.  However I recently was asked for help in hemming some curtains made from chiffon.  If you have ever tried to work with chiffon you are probably shuddering right now.  I had 6 large panels to create the rod channel and hem.

At first I said no then I thought, ok this is challenge time.  I love me a good sewing challenge, although more in the design department!   Let the research begin.  Nothing really gave me a good explanation of how to tackle it.  I felt bummed.  So it was time to figure it out on my own. 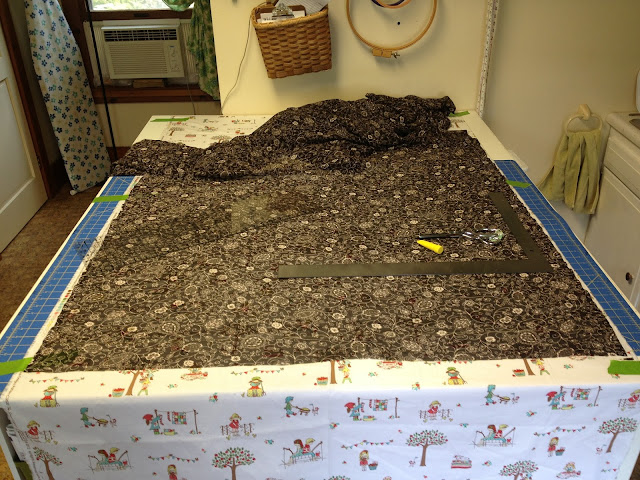 First what I did was tape down a piece of fabric to my work surface.  Without it this *&$)! stuff slid right off the table.  The next challenge I had was how to make sure it was straight when I cut it.  This was the biggest challenge since if you just breathed on this stuff it skewed everything.  Luckily the selvedge edges were kept in tact for the sides so this made straightening MUCH easier.  Basically I kept the selvedge edges straight with the edges of the fabric I had taped down.  I made sure the pattern on the fabric was not way out of whack by lightly moving and manipulating.  It took time for sure but by the 3rd one I had it down.  Believe it or not there is 10 yards of fabric sitting on the table above.  Just goes to show you how deceiving this stuff is! 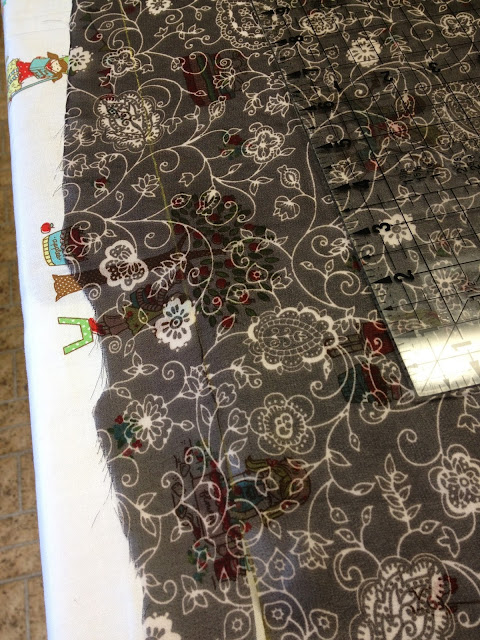 In the photo above you can see the edge of the fabric.  This is where the woman who brought me in the curtains to hem originally cut them thinking they were straight.  I'm sure they did look straight when she was cutting them but again this just shows how difficult this stuff is! 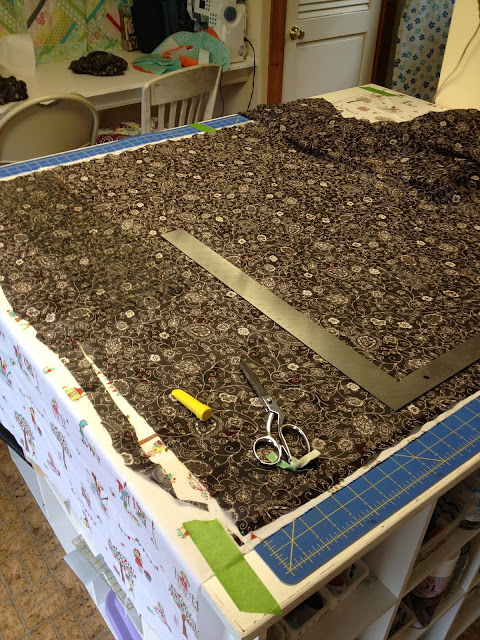 For cutting I used the largest straight edge I had then used my Chaco liner to mark it.  Then a good pair of scissors to cut.  I tried using a rotary cutter but I felt like it was moving the fabric too much plus it presented a big problem trying to figure out how to avoid cutting the fabric underneath.

The next big challenge was ironing or pressing rather.  I found that working in small baby steps was the only way.  I also found the pinning (with glass heads) before ironing while it was still flat on the table was the best way to make sure that it was going to stay straight.  I did find the use of lots of pins essential for making sure the slip factor did not drive me absolutely bonkers.

As far as sewing, I changed my needle to a 10 and just used a regular poly thread.  The first curtain had a bit of a wave to the top edge because the top fabric layer slipped a bit but after that I figured out if you gave a slight pull both ways on the fabric as it went under the foot it did not move and slip as much.  Looking back now I probably should have used a walking foot.

Unfortunately I do not have a finished picture.  I was just glad to get rid of them!  They did look beautiful though and I now know why curtains made from that fabric is not normally available in stores.
Posted by Jenna Lyn Smith at 10:07 AM No comments: 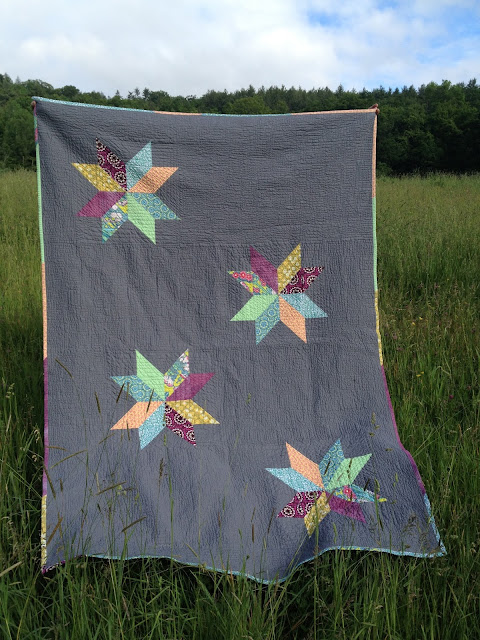 These stars started as an experiment...me figuring out how to make the quilted star - fast!  I love to quilt but get bored with the monotony of making block after block.  Thank goodness for modern quilting! 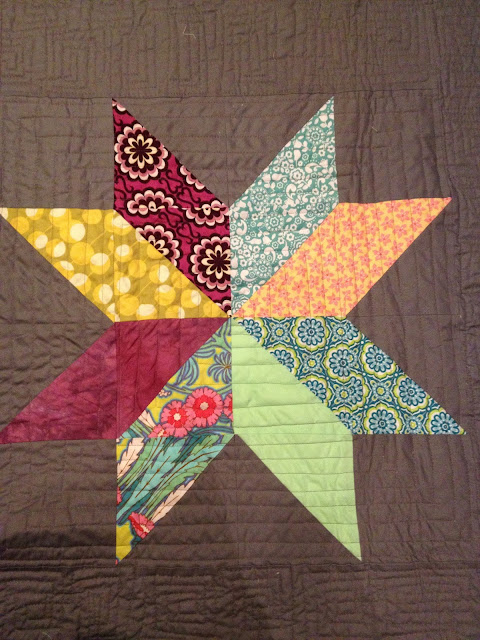 All four blocks were made simultaneously.  If you look close you can tell I used triangles, 12 quarter square triangles to be exact.  I think the original size (before cutting the quarters) was 10".   This would be a perfect project for a layer cake. 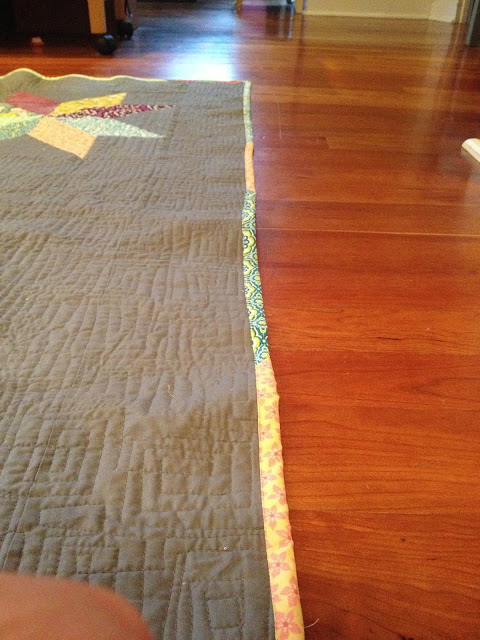 The binding was made with leftover scraps.   This gives you a good look at the quilting as well.  I did it on my domestic machine.  I love, love, love my Viking Mega Quilter with it's 9" throat space perfect for fitting in large quilts. 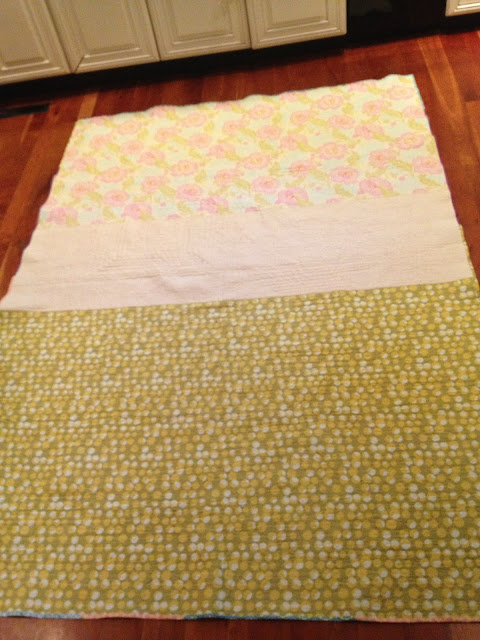 For the backing I just grabbed whatever fabric I had the most of.  I've never been a one-fabric-backing kinda girl.  I really didn't have a particular color theme in mind for any part of this quilt except for the grey background.  All the fabrics I just pulled from my stash or scraps with only the idea of keeping it bright and bold. 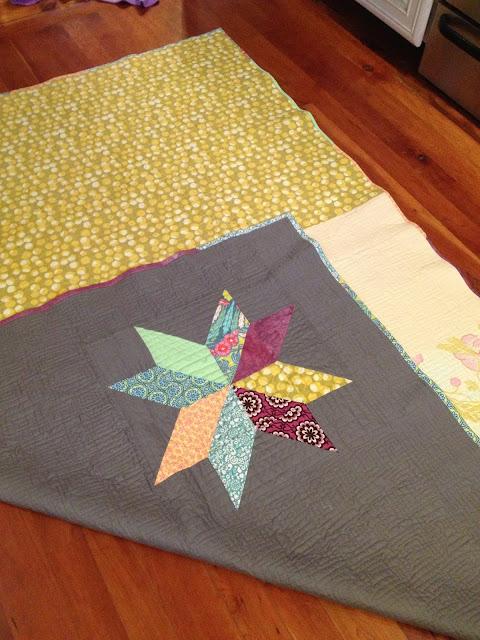 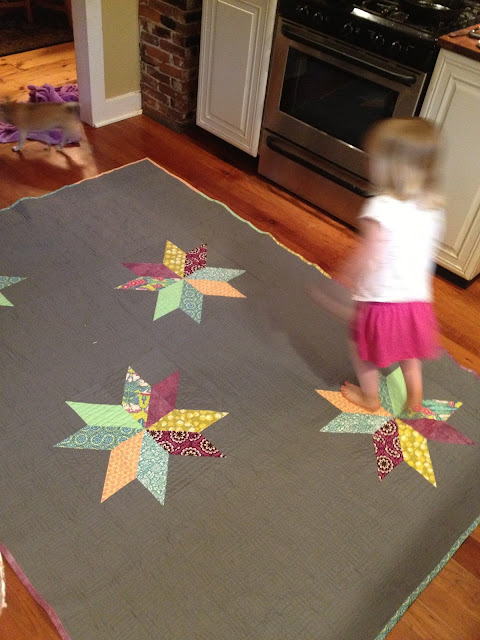 The final home for this quilt is supposed to be my home since I rarely make anything and keep it.  Until then it will hang in my shop.  I can't wait to get it back.  My quilts are made to be used and loved by everyone, young, old, 2 or 4 legged. 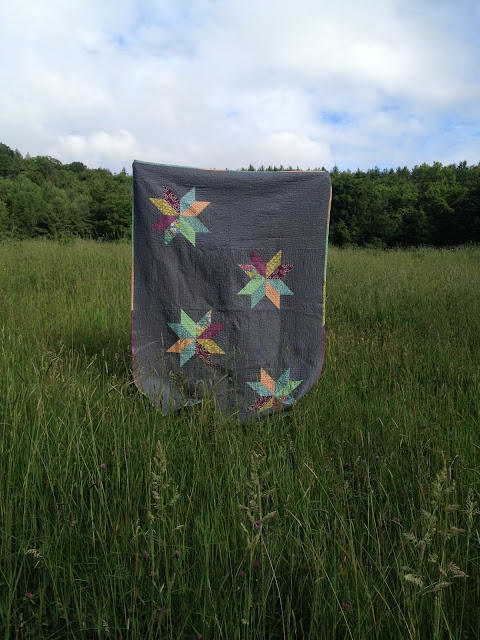 Posted by Jenna Lyn Smith at 8:53 PM No comments: