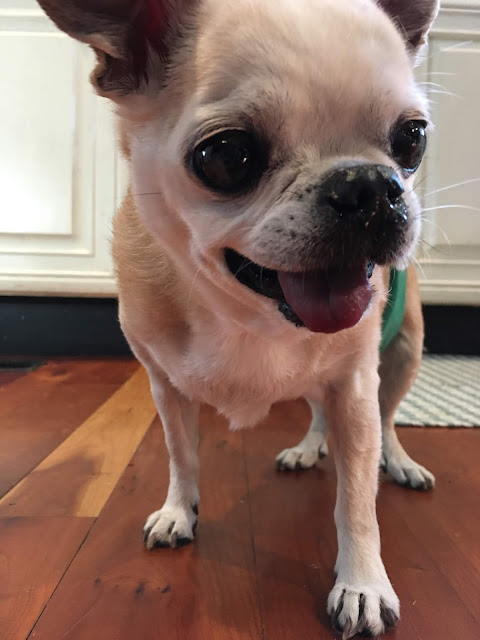 It's been exactly 1 week since we said goodbye to our little Winslow aka Winnie.  This photo was the last one I took of him just a few days before.  He was 16 1/2 but still looked like a pup. 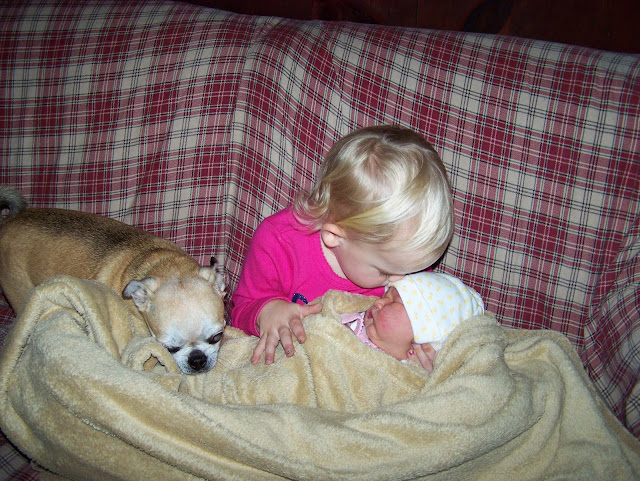 He was my baby before I had actual babies.  I got him shortly after we got married as a brother to my other dog.  He was waiting at the door when I brought both of my girls home for the first time...sniffing and checking them out.  As they grew he was like a living stuffed toy and for the most part he was a really good sport. 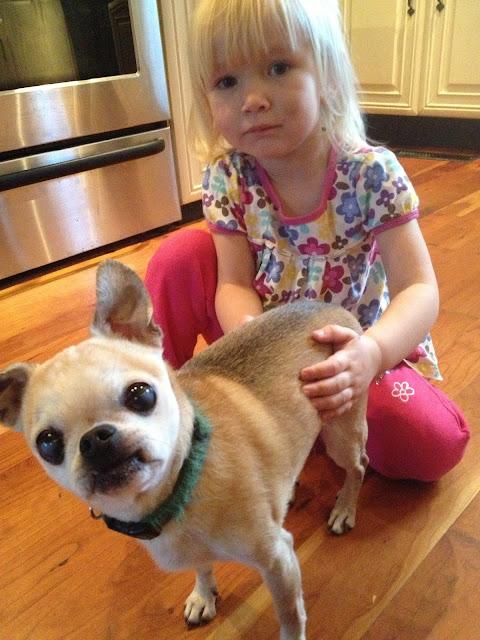 Winnie was a pug/chihuahua mix. He was the most happy-go-lucky dog.  He wasn't really very intelligent and until the last couple years he was an attention hog so much so that when my other dog or cat came over for a pet he would bump them out of the way. 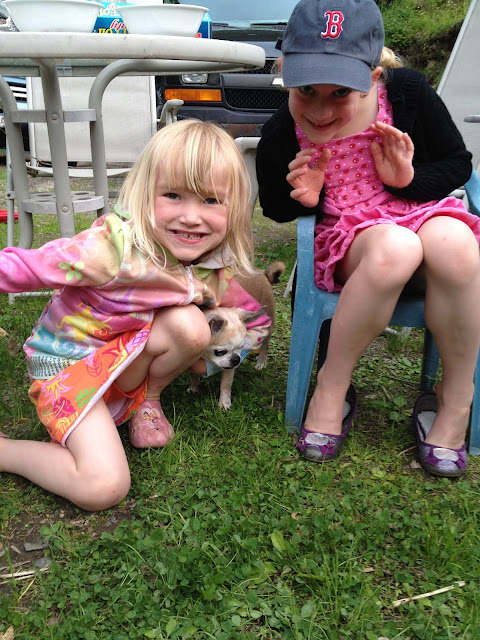 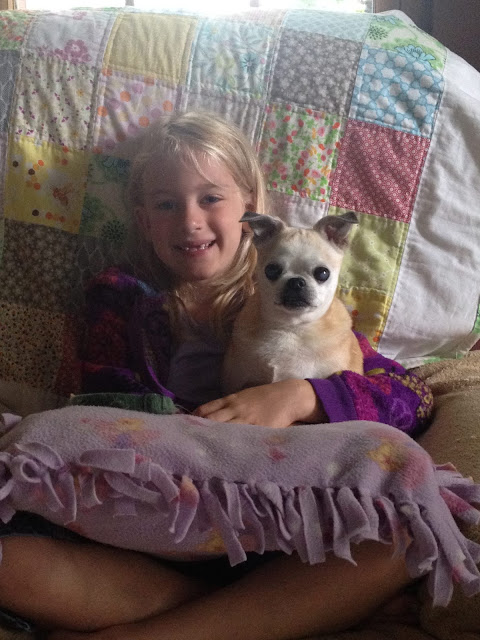 He was a special friend to both of my girls.


He was there when they learned to crawl and walk.

He was also super mischievous.  He loved snacking in the kitty litter box.  When he was younger he could find his way into and onto anything.  I'd often find him on the kitchen table. 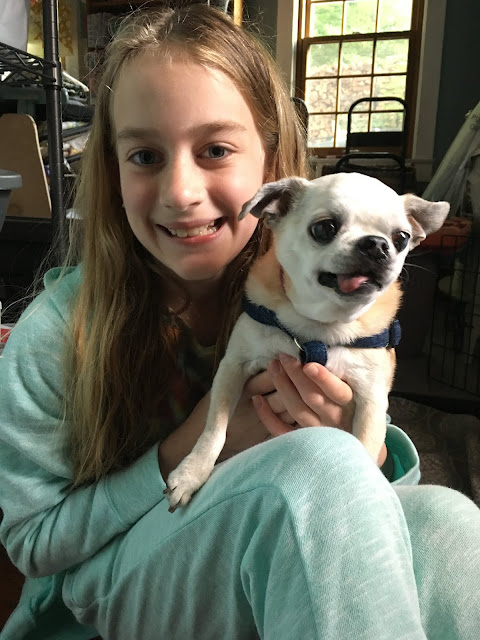 As he got older and mostly just within the last year or two of his life he lost his hearing and eyesight but somehow he still managed to find his way around and know when we were right there.  If he needed any attention and didn't want to go looking for it he'd bark so you would come to him.  He couldn't quite keep his tongue in his mouth after loosing some teeth but that only added to his goofiness. 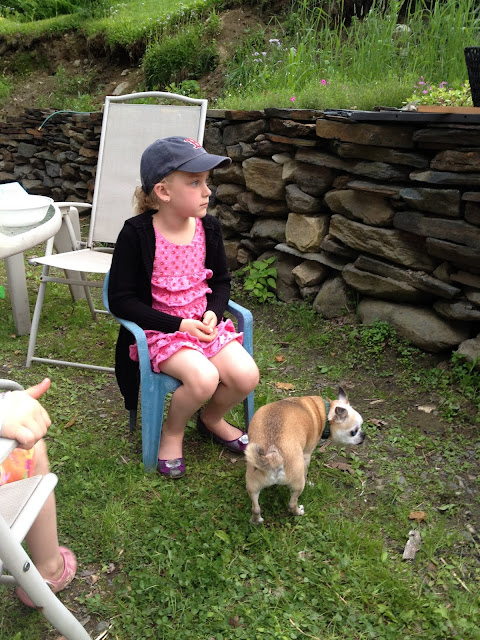 He was like a little vacuum.  I can still hear his little pig like snorts as he sniffed and searched for any crumb left on the floor.  Every time I was in the kitchen baking or cooking he could be found underfoot waiting, hoping for something to drop.  He was awesome when the girls were toddlers because we never had to clean up a food spills.  He would be there before it hit the floor.

One morning, a week prior to his leaving us, he just stood there in the middle of the kitchen and wouldn't move.  He seemed to be breathing hard.  He already suffered from congestive heart failure for many years and always had a cough.  It was amazing that he lived with it for as long as he did.  The next day I took him to the vet fully anticipating that it was time but they gave him some medicine that cleared up the fluid from his lungs and he seemed content to lay in his crate, be spoon fed homemade chicken and rice and be doted on for the next week.   We knew he was ready though and the vet told us he was ready but it's making that final decision that just had me.  We finally settled on the next day, Friday.  Early Friday morning around 3:30am after having not barked for a week Winnie started barking.  I went down and sat in front of his bed petting and comforting him.  He seemed to be comforted until about 6:30 when nothing I did would help.  We had deeply discussed this whole situation with our girls and they knew that it was time too.  As soon as the vet opened I called and made an appointment for 9:30am.  I brought the girls to school that morning offering that they could come with me but they chose to say their goodbye's and go to school.  Right before I was ready to take him at about 9:15 I could sense something was different.  You don't want any animal to suffer and of course that is all I could think of...mad at myself for not taking him in sooner.  But then I thought this is natural process.  It's hard for us to think about and see something we love have to die.  I had never been through anything like this.  So I gently picked him up and laid him in the car on his favorite blanket in the passenger side beside me.  I kept my hand on him the entire time and spoke to him as we drove to the vet.  It was less than a 10 min drive there.  I prayed that God would take him quickly and that he would not suffer.  As I drove into the driveway of the vets office and parked he took his last breath.  I couldn't not believe how it all played out.  I was so relieved and so sad at the same time.

I lost another dog a couple years ago.  He had been sick with diabetes for 4 years and still having another dog to take care of at home not too much had changed around the house.  But now that Winnie is gone we are without a dog.  We decided awhile ago that we won't be getting another one.  We are looking forward to heading out for a weekend and not having to find someone to pet sit or have to run home to let a dog out during the day.  We still have 2 awesome cats which are cuddle bugs and keep us all happy with a lot less work. 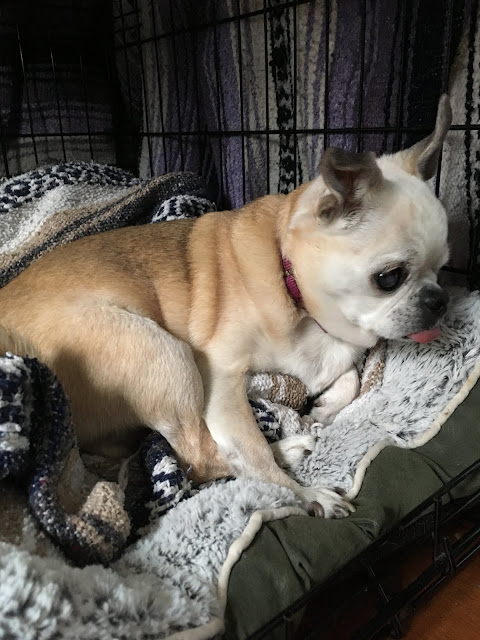 I still come around the corner or down the stairs thinking that I'm going to peek over and see Winnie snoring in his bed or I think I'm going to hear him bark any minute to be let out.  He always seemed to have a knack of doing that when I was in the middle of something.  It's going to take awhile for that all to go away but I will certainly never forget Winnie.
Posted by Jenna Lyn Smith at 8:55 PM No comments: