Sewing with Kids Series: Getting Started with Supplies 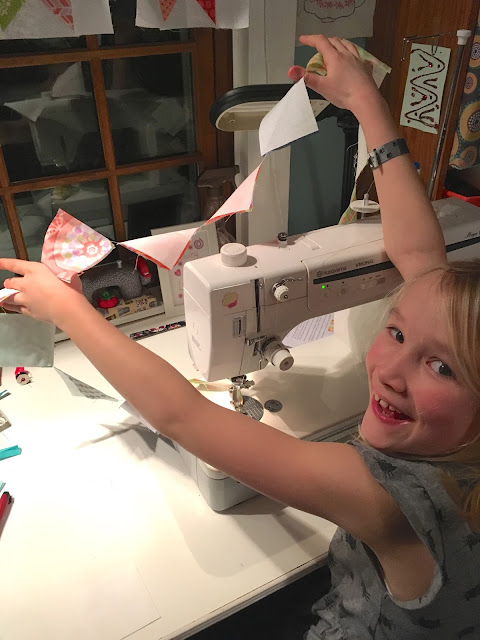 My most rewarding classes are when I teach kids.  This is not something that I thought I would EVER be doing.  Quite honestly before I had nieces and nephews and my own kids all other kids just plain scared me.  I don't know why... maybe the tantrums and unpredictability.  Ha!  Now I love them and find them all fascinating...or most of them anyways.

I have now been teaching kids to sew for 6 years.  When I had my shop and first started offering kids classes it was a little tricky to find the right projects and decide which age groups I wanted to concentrate on.  My older daughter started sewing when she was just 4 1/2 and independently sewing at the age of 5-6.  At the time I didn't really think anything of it.  But then I tried offering classes to 5-6 year olds at my shop and it just didn't work well.  I felt like they were not ready even if parents thought they were.  The majority just didn't have the coordination or the patience to tackle sewing at that age.  Over time though I could easily see that 8 seemed to be the magic age.  My younger daughter at the age of 4 1/2 was not even close to getting near a sewing machine even through age 6.  As she got into year 7 it became easier for me to think that she may not sew over her finger. Now at age 8 she is whipping out pillows and most recently (to my delight!) half square triangles.  It's just something that seems to happen when they get to that age.  I'm sure there's some developmental explanation out there.  My other daughter (now 10) who was always happy to sew at such a young age is no longer interested in sewing and would rather be mixing glue, glitter and whatever she can find into slime.   I dream that far in the future when she's starting a family she'll return to it.

I've also taught children one on one out of my home sewing studio periodically and over the past year have taught an after school program in our elementary school.  With every session I love it more and more.  As this last group was coming to an end I was thinking I was really going to miss these girls!  Because of their enthusiasm it gave me the idea to share how I like to sew with kids and get them to love sewing!  This after school program is actually one of my favorites.  It's held once a week for 6 weeks in 1 hr 15min classes.    The first 15 mins is them having a snack and listening/watching me go through the project for that day.  Then they have an hour to work.

I've come up with some really simple projects.  Most can be done in just one class.  I will share what our 6 weeks looked like in several posts.  I want to note that teaching kids to sew so they continue to have fun and love it is important.  Especially now with such instant gratification everywhere it's hard to get a kid to want to slow down and sew something. And honestly 75% of the time they are cutting and prepping and only a small amount is actually spent on the machine.  I find that at this beginning stage I will do a little more prep for them and not get too crazy with "the right way" to do something.   As long as there is not a gaping hole or something completely sewn wrong it can pass.

For the first time in my most recent class I presented each student with a sewing kit.  I was so excited about this!  Very often the kids end my sewing class and go home to old sewing supplies mom or grandma has had for ages with rusty pins and needles and no scissors sharp enough to cut through fabric.  This kit was what they used for the entire class so when they went home they were familiar with everything in there.

Here's what I included in the SEWING KIT: 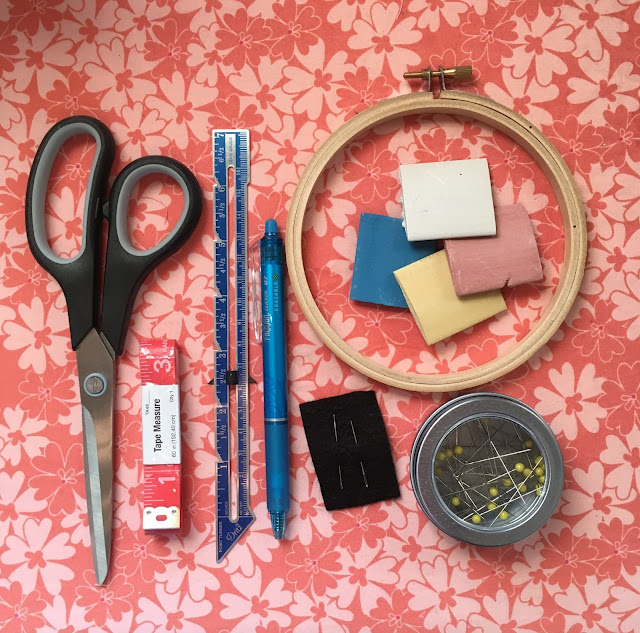 1.)  A pair of scissors.  You do not need an expensive pair of scissors to cut through fabric!  I bought these at Ocean State Job Lot for $2 each and they cut through fabric just as well as any of my expensive scissors.  As long as they don't start using them on paper all the time they will work well for a long time.  I also had a smaller size they could choose from since these were so big.  Half chose the bigger ones and the other half chose the smaller scissors.
2.)  Next is a measuring tape and smaller ruler (sewing gauge) with a point turner.  The measuring tape would have been enough but I really liked the idea of that point turner.  I use my sewing gauge all the time so why not!
3.)  The Frixion pen was the most expensive of everything but they work so well on fabric.  The way it disappears when you iron it is pretty magical for kids.  It's the little things that keep them motivated!  Plus our first project was going to be embroidery so this was super handy for that.
4.)  For marking I also threw in some clay chalk.  I wanted to give them something to mark on darker fabrics so this would do that.  This chalk is really nice and easy to leave a mark and then rub off.  They got all the colors just because they were in the box.
5.)  I gave them all a little embroidery hoop.  These were available at a nearby textile shop and cost less than $2.  We needed this for the first class when they were learning how to hand-sew and embroider.
6.)  I cut a small piece of felt and stuck in an embroidery needle and a Millners size 9 needle.
7.)  I got a big pack of yellow head pins and gave them about 50 pins each.  I found the containers with the clear lid at Dollar Tree, 2 for $1.
8.)  They also got a seam ripper but they are not shown above.
9.)  Lastly they needed something to keep it all in.  I wanted it to be big enough to put projects and fabric in so I found clear shoe type boxes at Home Depot for a $1 each.  They worked well to keep everything corralled and easy to access during class.

My next post will be about what they started creating for their first project.  It will be an intro to hand-sewing and a functional project they can keep in their sewing kits.  Click on the link below to be brought to the next lesson.